I know its been hot at home. I know that people are dying from the heat…literally. And, I remember how summer got into full swing in September and October on the West Coast. I can’t recall how many times I prayed for a “Fall-ish or Winter-ish” Thanksgiving…only to be awakened by crystal clear blue skies, and the waving of the palm fronds in the breeze. I do sympathize with you. Forced to shut yourselves away in those freezing air conditioned homes and cars day after day is a burden that is not easily borne. 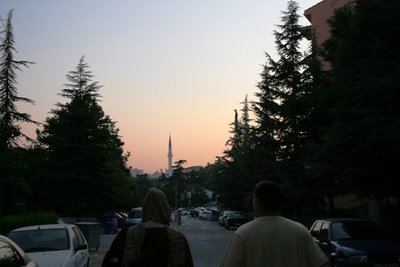 Heading Out Into the Heat

But, could I just express myself a bit here without the “been there done that” retorts that may be forming at the tip of your tongue? It has been warmish here also. Now they don’t run to the press when folks die of heat…because that happens in Central Eurasia frequently. They don’t open “cooling shelters” because there are still hard working folk who don’t have any type of shelter, much less a “cool” one. And they don’t have brownouts…because when it gets too hot, they just turn the power off until there is enough to turn it back on again.
Life continues to move forward, streets are dug up and repaired, bread is baked in wood fired ovens, and men swing pickaxes in the middle of the day to make new roads and paths.
A few days ago we got an indoor temperature reading of 117.9 degrees. We waited till it cooled to the low "teens" later in the day, before we headed to the store to pick up more paint. We expected this big hardware store to be cool, but it was just as hot as our apartment. Even though they have A/C, we have never been there when it was turned on.
In the taxi on the way to the store we had the typical old Fiat that make up the backbone of this city’s taxi fleet. The older cars don’t have A/C, but they make up for it in the vents that pour out an amazing volume of heated air, fresh from the engine.
On the way home I waited to catch a newer taxi (this one an 06 Hyundai). I saw the windows rolled up and the shiny paint and knew that this was going to be a good ride home. However, even though it was a new car with A/C, the driver was determined to make the trip without using the air conditioning or rolling down the windows.
An old friend of ours who has passed into the nethers lived abroad for over 40 years in Central Eurasia; she told us “I was wet for 4 decades”. That has hit home for us. It’s either the “wet” during the shower, or the perspiration that hits once the faucet is turned off. In either case…there is no water shortage here.
Posted by Silk Road Nomads at 12:36 AM

Is it humid or dry heat in Turkey? I have lived in both the south and on Guam and know the feeling of being damp all day.

I can't imagine being that close to comfort with AC and not using it.

At least your not just wet behind your ears. :)
Loves and misses,
Brenda

PS A good joke I heard the other day, a lady looked at an over weight guy and goes, I see you have got your things on the level.

You got your bubble in the middle.