Round 2 of the goodbyes is over. It ended quickly...a misjudgement in timing led to a 30 second goodbye at the gate. It was a blessing really. We had a great time in Winesburg and our last night was an emotional one as our friends gathered to say "So Long". We did not need a lengthy, drawn out farewell. Ann and Ruth's was the worse, for Best Friends, reality hit us pretty hard. John and Ruth: Thank You.
But once the wheels were up we were amazed again at this opportunity we have to wander along the Silk Road for the next 3-4 years.
Round 3 starts on Saturday and Round 4 wraps it all up on Sunday. That will be the end of the family goodbyes. Other than a few neighbors and a team meeting to say "farewell"....it will all be over. Then we will settle down to two weeks of pulling it all together. April 17 is still good. 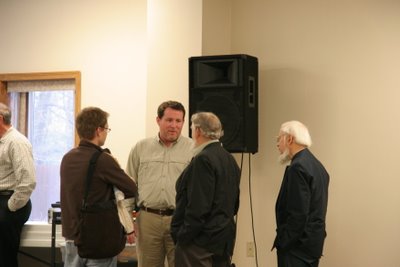 Visiting With The Local Amish
Posted by Silk Road Nomads at 4:25 AM 1 comment: 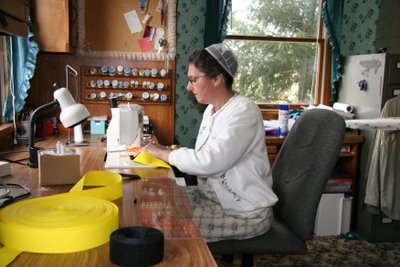 Ruth Working On Our Straps

Harness shops, wholesale fabric houses and Amish farms were on the docket for today. We started with an early breakfast and went hunting for material to make straps to secure our containers for shipping.
After a day of running around and an afternoon spent sewing...we ended up with 18 quality straps made out of webbing and industrial Velcro. All for around $2.00 each.
Tonight we had dinner at the Mast house. Complete with Sugar Maple tree tapping and pony rides for the kids. Tomorrow we have a morning meeting and an afternoon seminar.
Things are falling into place. Dates for a April 17-21 departure are still firm. 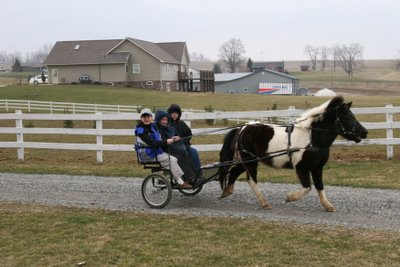 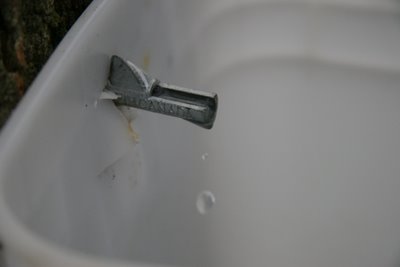 This Drop Of Sugar Maple Sap Is On Its Way To The Boiler...This Tree Puts Out Over 2 Gallons A Week
Posted by Silk Road Nomads at 4:03 AM No comments:

Living Off The Fat Of Ohio

We got home to Ohio at 12:30am. Our friends picked us up....fed us...and put us to bed at 4:00am.
Yesterday we picked up two spare sets of eyeglasses and some outdoor wear. Today we will be fitting Elle with her spare glasses and coming back for a 21lb, 12 hour smoked roast. The clan will be here tonight and we will eat, laugh, eat some more and tell stories.
The life of the Ohioans is a good one...it is even better for those who visit! 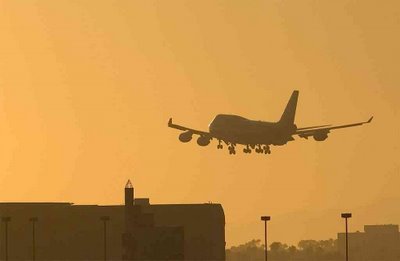 From The West Coast to the Smoked Roast
Posted by Silk Road Nomads at 6:08 PM No comments:

We are on the road today...Well, on the tarmac really. Heading Medford, Oregon to Canton, Ohio for a week with the Mennonites and Amish. These guys are our family. We can't wait to see them, and we will hate saying goodbye. This will be our final gathering until 2010.
They feed us more than we can eat, stay up late, get up early and laugh always. 8 days from now we will arrive in Los Angeles, tired, fat and happy.
Posted by Silk Road Nomads at 5:02 PM No comments:

We had a busy weekend with some pretty hard "goodbyes" to say. Oregon family and friends made it a great week. Today some of our friends threw us a "goodbye BBQ".
This will be the last time my folks will see us, and we them, for the next few years. While there is high excitement, there is a great sense of appreciating what we have here at home, accompanied by the reality of loss.
This is exactly what we want our kids, and us, to see and experience. The idea that there is a completely different world out there. That we are not the only people on this globe that matter or have an opinion or a need. The closer we get to departure the more we appreciate where and how we live.
Off to Ohio in 36 hours to wrap up more "goodbyes".

Our journey begins in 32 days.
Posted by Silk Road Nomads at 4:58 AM No comments:

For those of you who have not asked...please skip this post. We are writing this in response to several of you who have wanted to be a part of outfitting us for our trip. After some "pressure" we have put our pride aside. Thanks for caring!

Basic Meds: A years supply for most of these:
Aleve
Tylenol
Cold Medicines
Antacids...etc.

We will make addtions and deletions to this list as we move forward. Thank you for being interested in what we are doing and for pestering me to post this list.
Most of these items either need to be packed or ordered before April 1. Use the E-mail link on this site if you want to contact us.
Posted by Silk Road Nomads at 8:59 PM No comments:

For those of you who are asking: The number we need to get past is still at 200. Keep us and that number in your thoughts this week. We are "pressing the door" at this point.
Posted by Silk Road Nomads at 4:21 AM No comments:

We are still dead in the water as far as pictures go...so gear up your imaginations and "visualize".

We are spending a few days in Oregon saying goodbye to parents and friends as we close down our Stateside lives and look forward to Istanbul. We have a few meetings this week and then head to Ohio on Tuesday for a whirlwind time with family and a last few meetings.

We are still on target for an April 19-21 departure for Turkey. Our car is ordered and should be on site by the end of the year. We still need a few more things to fall into place to keep us fed while we are away. However, the excitement level is high around our little family and we believe that everything will gel soon.

Our internet access is sketchy. We will post when we can.
Posted by Silk Road Nomads at 4:00 AM No comments:

You're going to have to imagine that there are pictures here for the next few days...maybe weeks. Our digital camera went "belly up" in a bathroom in Wales this December. We have been snapping it back together several times a day since then, until we finally pushed it to its limit.
It now belongs to the kids who think they might be able to coax a few more pictures out of it. In the meantime we have quite a list of supplies to gather that take precedence over a new camera. It is coming....so let's be patient. This exercise will do us all some good.

So here is a story to "view" in your mind:
Friday evening we had just finished with our meetings for the day in San Diego. Since we were alone (the kids had flown to Oregon earlier in the week) we took a drive through Downtown and Shelter Island.
Out of nowhere something hit the hood and windshield of the car we had borrowed, I got out to see what we had hit..or...what had hit us, and was attacked by a drunk. I knocked them away and only engaged them when they tried to climb through the open window of our car...Ann was still inside.
Reacting like I was trained....within a few moments the "attacker" was on the ground screaming, and I was still standing. No, I didn't cause any undue (i.e. "undeserved" )pain...it was just a "reflex".
Three SDPD units arrived and we discovered that our hostile friend had just left a local gin joint and had been throwing rocks at passing cars. Ours was a direct hit. The rock had left a several inch scratch all the way to the metal in our hood. We were free to go and She....(yes, "SHE" a 50'ish older woman went for a ride to detox). We declined to press charges.
This story would have made for better telling if I had embellished the gender and size of the Nut, and I realize that those of you who live sheltered lives are astonished that your sensitive and caring author would ever resort to physical force.
First of all...we are all products of our environment and respond as we have been trained, reflexes happen, actions have conseqences, and bad people go down.
Second, those of us who have had experience with big, vicious, and angry gangsters in dark alleys realize that those same dark alleys look pretty good compared to angry, drunk old ladies.

Got the picture?
Posted by Silk Road Nomads at 6:36 AM 1 comment:

We are sick....Really, really sick. This Typhoid vaccination is causing us to have some bad side effects. I guess we are the 20% who respond "negatively" to this oral vaccine. We still have 4 days left of this regimen. On top of that Elle and I are fighting a good chest cold. Wahoo.
So, we have the nausea, fever etc...of those who are infected with Typhoid, and the coughing, wheezing and hacking of pneumonia, but we aren't going to die. If you are willing feel this bad to stay protected against a virus that you may never contract...You must be dying to stay alive. Right? Ok.... forgive me, I am a bit woozy. 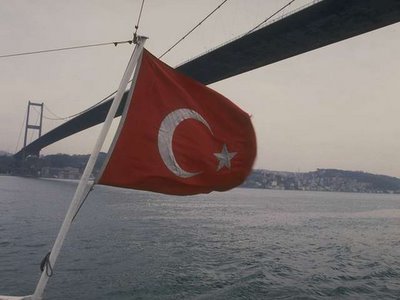 Istanbul
Posted by Silk Road Nomads at 10:00 AM 1 comment:

We spent the day picking up packing materials for the move to Istanbul. It looks like we are clear to leave around April 15. We have a house rented and ready for us to move into. We are busy with downsizing our home to fit in 10-12 suitcases. We are all making our "books" the highest priority. 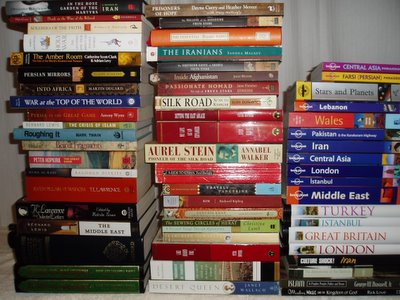 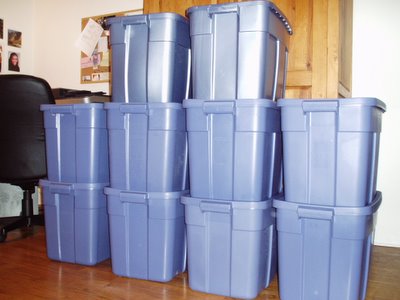 Quality, Durable, Designer Luggage
Posted by Silk Road Nomads at 8:34 AM No comments: