Wrapping Up Life in Turkey 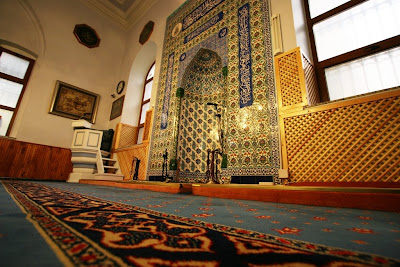 We are down to the wire with just 7 hours before we leave for the states. This last week has whooshed by with a never ending stream of food, invitations to çay, and visiting with the locals.
Today we are covering all the furniture with sheets and emptying the fridge, cupboards and samovars and things are just weird with so much of our life in flux. 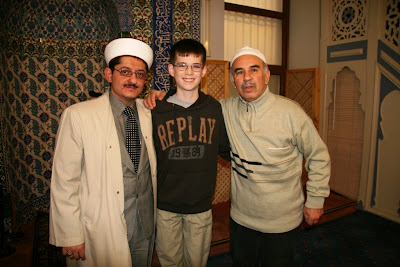 Stanley with Metin Bey and our Imam

Stanley and I went to our last prayer at our local Mosque and spent the afternoon saying goodbye to all the friends on our street. Ann and Elle are visiting the women in our building and even now the doorbell is ringing. 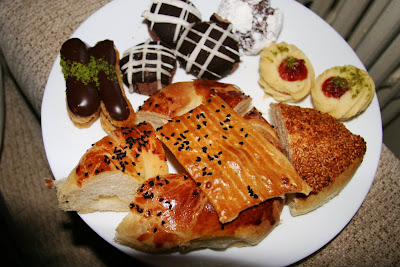 It will be a few days before we have any wireless service in the states...as soon as we are up and running we will let you know.
Posted by Silk Road Nomads at 4:44 PM No comments: 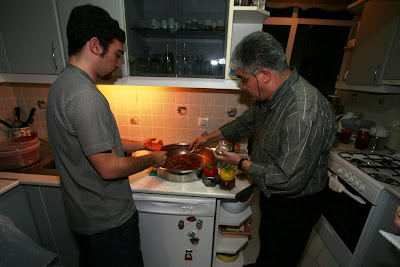 The battle to keep the weight off has opened up a new front as more dinners and teas are on schedule as our departure approaches. Our last update had us heading upstairs to Murat Bey's home for homemade çiğ köfte, patlican (egg plant) and kebaps.
Stanley and I tried to help out with massaging the bulgar and ground sirloin but gave up after a quarter of an hour. Samet, Murat's son took the lead and continued to finesse the mixture of meat, spices, onion and peppers to a smooth consistency. Over an hour of work was needed before he announced it ready. 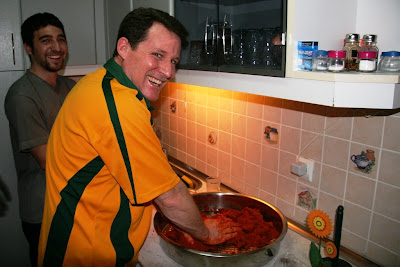 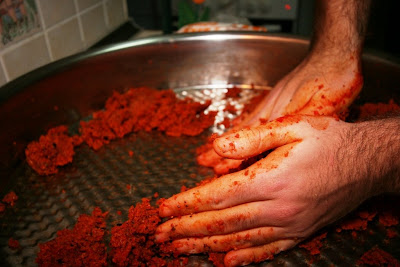 Following traditional Ottoman hospitality our plates were loaded for us and when they were too full to hold any more the food was placed in stacks on the table next to our plates...waiting patiently for their turn to be funneled into our distressed mid-sections. 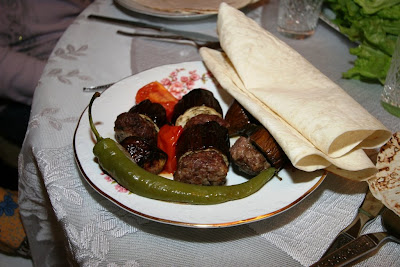 We gave a valiant effort and were rewarded with Turkish coffee, followed by a Mastic pudding and Ice Cream, all washed down with a final set of scalding hot çay. While I was terribly uncomfortable with all we had to eat...it will go down as one of the most delicious meals I have ever eaten....simply an amazingly succulent mixture of flavors and spices.
The next morning Stanley asked if he could have the remainder of the Çiğ Köfte for breakfast. I am going to miss that kid.
Here it is 6 days later and my hands are still stained red and smelling of onion, spices and garlic...a morning scent-memory of the sins of the gluttonous.
In just a few hours we head upstairs again...this time to another neighbor's apartment for whatever their definition of a "light meal" is. May God help us all. 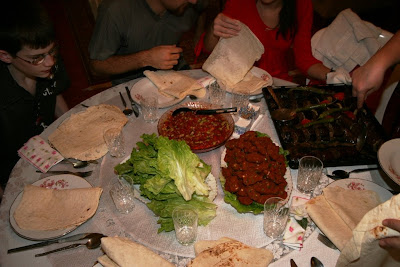 City of the World's Desire to City of Angels 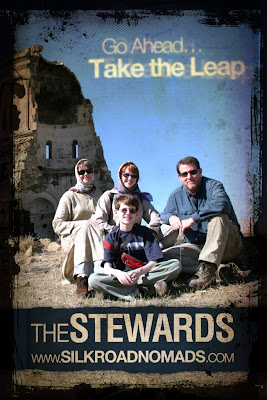 Down to just 18 days till we leave the City of the World's Desire and land in Los Angeles...and things are going pretty smoothly with the transition. Much of it is easy because we are keeping the attitude that this move to the states is just a "trip".
We will keep our apartment, truck and the stuff of life in Istanbul. Plans are made to return for the month of July to visit our Istanbulu family and take care of tax payments and vehicle inspections.
Our permanent return to Istanbul is scheduled for January to March of 2010. The kids are already having separation anxiety issues with leaving Turkey...mainly with friends and food. Tomorrow evening, Murat Bey, our neighbor, (who makes the world's best Ciğ Köfte) is having us up for dinner and a crash course in how to make the spicy raw ground meet delicacy. It is a huge issue for Stanley who is famous in our neighborhood for his ability to eat the stuff in amazing quantities. He wanted to learn so he can make it while in LA.
Our calendar is still filling up...if you or your friends want us to visit your neighborhood to chat about the great nation of Turkey and the tribes and peoples who live along the ancient Silk Roads, send us a note...we would love to hang out with you and tell you the stories of life as we live, travel and wander on the far side of the world.
Posted by Silk Road Nomads at 12:43 PM No comments:

A Short Walk in the States....Insallah 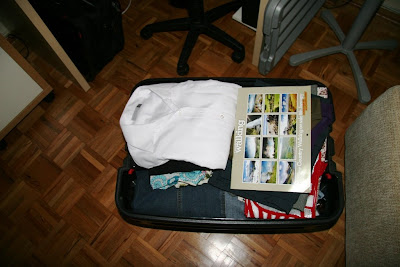 We are just 3 weeks away from heading back to the states for a year. Our days are full of visiting, trying to figure out what "20 kilograms" per person of baggage merits making the list of things to take and trying to get in our last minute goodbyes.
We arrive in LA on February 24 and will spend the next month between LA, San Diego, Bakersfield, Grants Pass and Seattle. Our house in Brea will be open in June and then we can settle down and get back to the business of making some money to return to Turkey and visiting our family and friends.
Our return to Istanbul will hopefully be quick...we are keeping our flat and truck in the care of our Istanbulu family and have tentative plans to return in August to lead a tour and celebrate Ramazan with our neighbors. We are already missing Turkey and we haven't even left yet.
If you want to hook up with us while we are in the states give us a hoot...our calendar is filling fast. For more on the August tour head to Silk Road Expeditions. 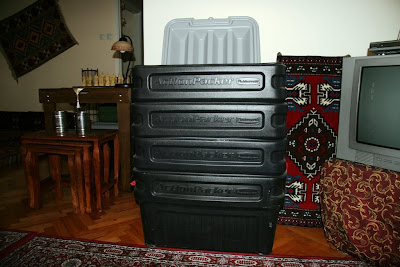