Has anybody wondered why the Doomsters aren't yelling quite so loudly these days about Global Warming? I guess its hard to make a fuss when your teeth are chattering. Everyday here in Istanbul we are reading reports from China, California and the Midwest that claim that this is one of the severest winters on record. We are certainly feeling the effects of Global Cooling here in our neck of Asia. 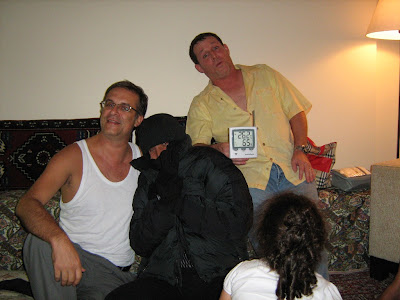 Just goes to show ya, when you shake your finger at others... it might get frostbit.
Posted by Silk Road Nomads at 12:36 PM 2 comments: 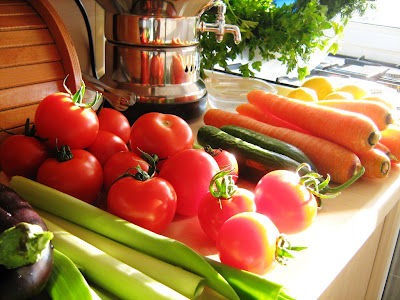 I know I have told you about our weekly markets before...but, in this relationship you are unfortunately at the mercy of my whimsy. I look forward to the Thursday Pazar that shuts down a few miles of side streets here in our corner of Istanbul.
Busier than Disneyland on the 4th of July it is a chaotic shoving match with vendors touting their wares and goods in high pitched yells and shouts, each trying to outdo the other. The sights, sounds, flavors and smells are full and vibrant.
With winter in full swing I was amazed at the quality of the produce we gathered this week. Elle saw them on the counter waiting to be washed and shot these pics as the afternoon sun was streaming in the window. 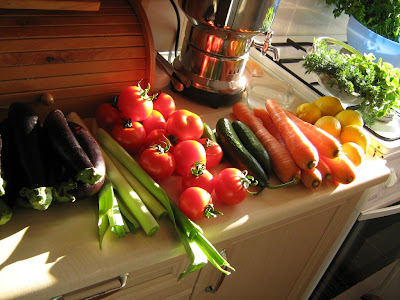 Posted by Silk Road Nomads at 1:23 PM No comments: 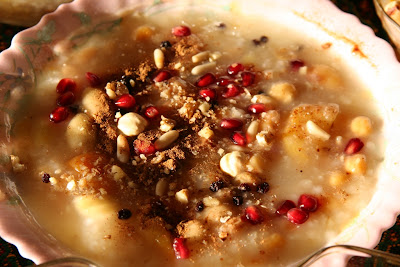 Middle Eastern tradition holds that when Noah berthed his boat on Mount Ararat (Ağri Dağ) he instructed his wife to gather up whatever food and grains were left over from their cruise to salvation and make a pudding to mark their amazing passage into a new life.
Today across the Middle East, Central Eurasia, and wherever Muslims are found...that celebration of deliverance is still remembered by Aşure Day. Tradition dictates that children and wives make this pudding and deliver it in small bowls to their neighbors, originally meaning the 40 households immediately north, south, east and west of your home.
Yesterday our kitchen was turned into "Aşure Central" and Büyük Anne came to oversee and season the pudding. An all day event...it takes 4-5 hours to cook and bring the ingredients together. 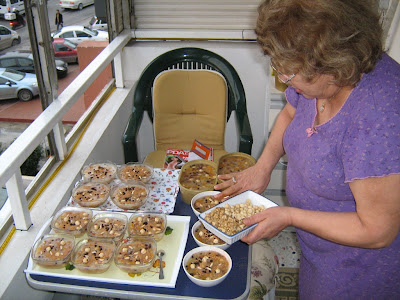 Sesame seeds, rice, white beans, raisins, figs, pomegranate seeds, dried fruits, garbanzo beans, wheat, apricots, currants, hazel nuts, walnuts, pine nuts, sugar and water are combined to make an amazingly delicious pudding.
Our morning began early with the first of the dishes from our neighbors arriving and we in turn spent the afternoon delivering Ann's dishes to them. Its kinda like a dessert co-op with purpose and meaning...as long as its food coming thru my door its all good. 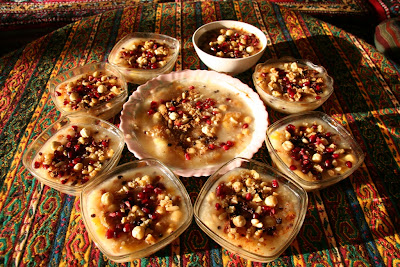 Waiting for Me
Posted by Silk Road Nomads at 3:30 PM No comments: 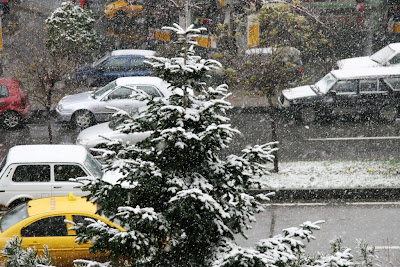 New Year Snow
Getting back to Istanbul is a good thing. We arrived a day ago and have been getting back in the swing of life. We finally found the Christmas weather we had tried to find in the UK...just outside our window. It has been snowing all day and more is expected.
It will be a few days before we get things sorted, paid, filled out, washed and back into the swing of blog-life, thanks for letting us take a breather from E. 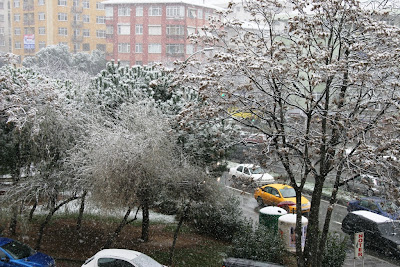