Working in the Dark 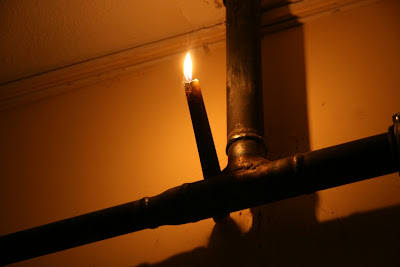 Yep, I have been neglecting you again. Sorry. Things are still crazy with the Visas and car registration and we have been busy holding it all together while we wait for news.
This last week some "improvements" have been made in our apartment building. As a rule, you can count on all Turkish apartment corridors to be pitch black with the light switch on a short 3-10 second timer...just enough time to make it to the next stairwell where you can hit the switch again, so you can look back and see what you just tripped over. 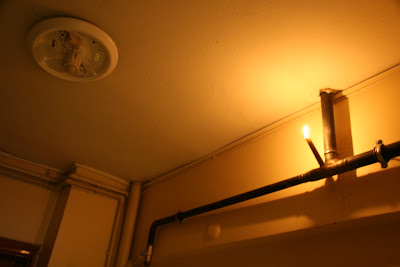 Yesterday Turkish ingenuity showed up in the form of an old candle that the electrician was propping up against the gas lines to use as a work light. He just moved it, his tools and ladder from spot to spot until he had installed all 18 fixtures in the building.
I found him when he had just started working and offered him my flashlight, but he just smiled and said that his candle was easier to work with and didn't need batteries.
Six hours and one candle later he finished up and headed off to his next job...nailing 50 feet of 220V electrical cable to the sidewalk outside to put in walkway lights.
Posted by Silk Road Nomads at 2:48 PM