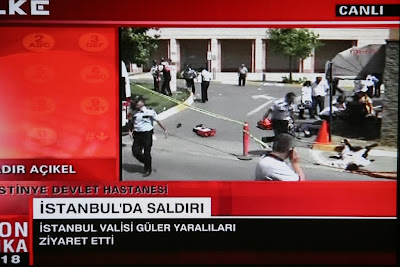 The American Consulate in Istanbul was attacked a couple of hours ago by terrorists...3 Turkish Policemen are dead, 3 terrorists are dead and others are hurting. The attack took place at the main gate to the Consulate which sits some ways back from the road.
Turkey guards the entrance to our Consulate and paid the full price of today's butcher bill...for that we are humbled and grieve along with their families and children.
Shortly before the attack, and 1000 miles east, 3 German climbers were kidnapped by 5 terrorists as they camped with their 13 member climbing party on the slopes of Mt. Ararat in eastern Turkey.
After all that is said and discussed about the "war on terror", it really boils down to being grateful for friends like the great nation of Turkey who stand alongside us.
Posted by Silk Road Nomads at 2:49 PM