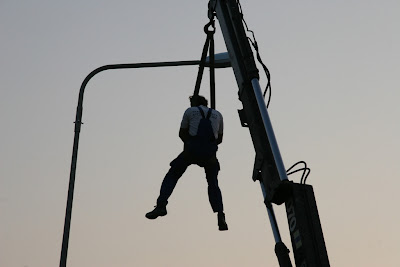 Hanging Around in Greece

It doesn't happen often, but occasionally we wonder what it would be like stay in one place and culture for awhile. This last week away was cause to reflect. To avoid playing the pity card we have decided to leave most of the details of our "Greece Do-Over" to the publishers. The gist is that the place was filthy and crawling with earwigs (pincher bugs).
They first made their presence known as I was pulling on my shorts and they began dropping down my legs. Ann had hung the wash out to dry and found her pants moving on their own in the morning. I don't know if they have a patent on the world's biggest earwigs...but they should have.
Our little cottage was infested with them and we ended up moving outdoors...even to the point of rigging up an outdoor shower to keep them from dropping on us at a vulnerable moment.
We try to be low-key folks...but finding them crawling around inside our clothes gave us the heebejeebies. Later we saw them on the bed, pillows, dishes and furniture...it was like living in a terrarium. Even today the phantom crawlies are still causing us to squirm.
For now we will be hanging around Istanbul...scratching.
Posted by Silk Road Nomads at 9:50 PM