Bare Feet and a Headless Goat

A year or so ago I wrote a column about being shoeless in Asia. I was never a barefoot kid...even though I spent most of my teenage years at La Jolla Shores, away from the beach I was a shoes and socks kinda guy.
Asia has changed all that, I haven't had socks or shoes on now since March, in fact in the last 17 months I have only worn shoes for 6 of them...the order of the day is now bare feet and Birkenstocks. Which, while bringing me new freedom and comfort has also brought me fully into the cultural understanding of frequent ablutions and the sense in stopping at the Mosque fountains to freshen up. Last week we stopped for a break on the border road between Iraq and Turkey...crossing a deep river on an old bridge we found a small clear running stream that dropped 20' to the river. 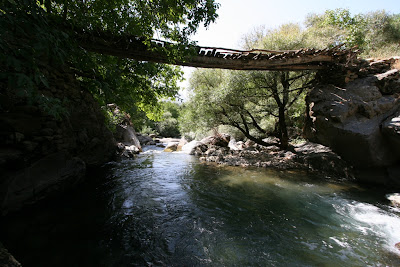 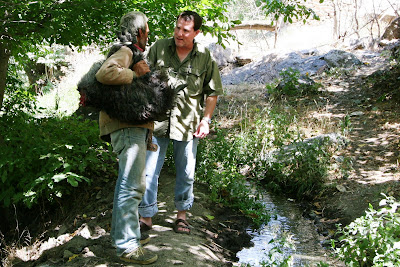 My Friend and his Headless Goat

Our day had been long, hot and dusty and I longed to wash the dust and dirt off my feet. I stopped by the stream, rolled my pant legs up and began to wash when a man from a local tribe appeared out of nowhere with a headless goat wrapped around his shoulder.
We had a nice chat and I learned that he had dispatched his evening meal just a few minutes earlier...confirmed by the still dripping neck, and that he was on his way to a pre-Ramazan family feast deeper in the mountains. We made plans to hook up next year and then he wandered off and down the path...and another once in a lifetime cross-cultural connection was forged.
So who'd a thunk going barefoot would be the key to meeting a mountain tribe and a headless goat? Want adventure?...leave your socks in the drawer this week and see what happens.
Posted by Silk Road Nomads at 2:20 PM

Hi,
I've been reading your posts since the beginning of July. I really enjoy them.