The traditional launch of The Steward Tribe Christmas Season has always been on Thanksgiving night. Back on the other side of the world we would spend the week prior to Thanksgiving decorating the outside of our San Diego home. Then after Thanksgiving Day was over, the food eaten, the table cleared, we would gather on the sidewalk and throw the switch for the lights to come on. It was quite a moment for our crew...and for the local electric grid. 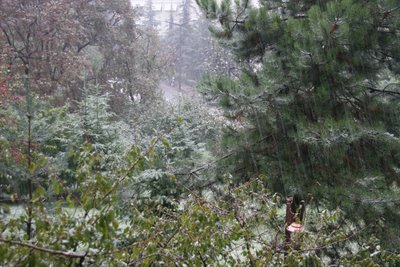 Today we awoke to thunder and snow in Istanbul, and while it is not staying around it set the tone for an early Christmas launch. After hours of hints and pestering we finally capitulated and the holiday music and DVD’s came out. Since Christmas doesn’t get the airing here as it does in the West and there is a noticeable lack of Christmas spirit…maybe we need a few extra weeks to get the Christmas season warmed up and ready to go. 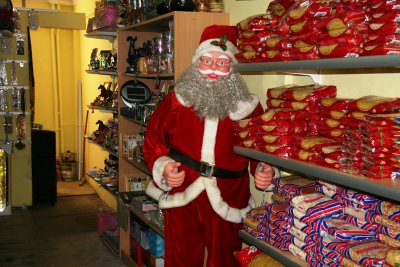 While we were out east on the Turkish border with Armenia I found Santa Claus tucked away in the back of "Habib's Market" in Kars. The owners proudly claim that he is the only Santa in the eastern region (at least one that sings and dances like Elvis).
Sorry to interrupt your Harvest candy fest...I gotta run...the popcorn balls, fudge and cookies are ready.
Posted by Silk Road Nomads at 4:33 PM

Hello! Way past time to update! :)
Love ya anyways!
B