The Pits of Inspiration 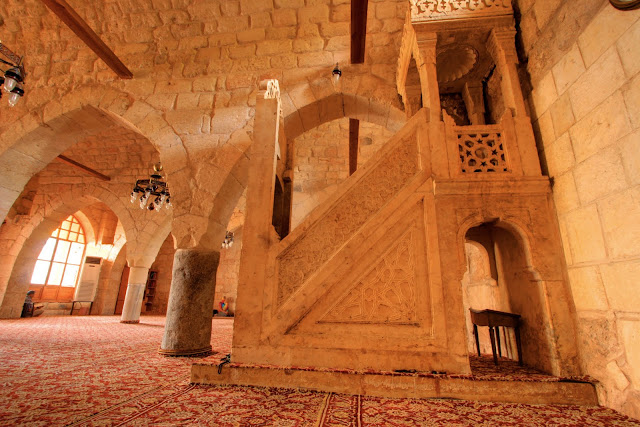 Minbar of the Yağ Camii in Adana

A few weeks ago while traveling through a remote stretch of southeastern Turkey a line skipped through my head which I jotted down in my neglected Moleskine...”if you can’t write while in Istanbul”....and the end of the phrase was left hanging. Seven words with nothing to build on.
Everyday since then the phrase has run through my thoughts and everyday I have waited for the completion of the thought and (I hoped) the inspiration it would give.
Day 12...nada. I have been sucking on date pits for the past few hours and waiting for the experiences and emotions pent up inside me to work their way down to my fingers and out onto the page. But, other than consuming a bag of dates (at 120 calories a pop) I have nothing to show for it.
This last run to the east was something of a homecoming to me. I don’t really have a healthy sense of fear. That’s not a macho thing...maybe its just a reflection of a not-so-bright intellect. But I really can’t recall to many instances in my adult life where I was afraid. But I am holding onto hope that I could be.
If there was an element of my life that I think could cause me to be fearful...it would probably be the inability to roam, to be bound to one place or a routine that my livelihood or situation was mandated upon. So...getting back on the road, back to the ancient paths that make up parts of the Silk Road was somewhat of a new lease on life to me.
We intentionally made this trip short to ease us back into the difficulties of Asian travel and to test our road savvy and limberness. Now...being home for a couple of weeks I am aching to be back out in the mountains and villages of Asia Minor.
During this last sojourn, we had the chance to visit several old mosques that were built on the ruins of Christian churches. The photo above was taken in the Yağ Camii (Oil Mosque). The mosque is built on the foundation of the old 5th century  St. Jean Church. Originally the mosque was named the Eski Camii (Old Mosque) but later took on the name “Oil” due to the pressing of olives that took place in its courtyard and next to the walls. Today it functions as a mosque and medrese.
Back to my problem and the end of the sentence that has been haunting my thoughts. I guess if I can't write while in Istanbul, it means I’m out of dates....time to run.
Posted by Silk Road Nomads at 4:04 PM

You've such a great blog. I appreciate it much. It inspired me to get my own underway. Anyway, I hope you find loads of inspiration as you explore and settle back into the Turkish life.