Conundrums of a Car Commander 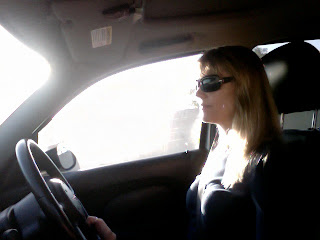 How can I look so young...and yet see me doing things that old people do? Coming up in just a few weeks is our 29th anniversary of the day we started dating. I know...it took me a while to make her mine legally, but the day is significant because it was the day I fell in love for the first time.
As the Alpha male, I was always the driver of whatever vehicle we were in...in the years before we were married I drove, after we were married I drove.
On only two occasions did Ann drive while I was in the car. The first time was when we almost lost our lives on our honeymoon when she fell asleep and caused a semi/tractor to brake hard, and lose his load all over the freeway......that woke me up quick.
The second time she drove (with me as passenger) was 15 years later on the way home from the hospital with me in a body cast from back surgery  (I still think I could have moved my feet enough to drive on that one).
In all the years of traveling together...as I said, now at 29...I have driven. It was my roll. My job.
But in the past few weeks I have been so weary of the travel than on a couple of occasions I have actually asked Ann to drive for me. In fact she is driving on the I-5 right now returning to Brea from San Diego as I write.
My mother-in-law (who by the way I dearly love and adore, and am sure has lost weight even though she denies it) once thought me chauvinistic  instead of chivalrous. Sometimes she has some pretty good insights into what makes me tick.
But this is the stuff I see all the old men who wear baby blue doing....sitting on the passenger side of the car while Besse drives him to his doctor and pharmacy. In Elle's  vernacular, 'I so don't want that."
So here we are. If Ann drives me another 2 hours I will be approaching a complete 24 hours of being driven by my wife in the course of our togetherness. That means that in our (almost) 3 decades of hanging out as lovers, she has driven for one full day with me as a passenger. Where do we go from here? I have no lane change options, she hates it when I lean over and lay on the horn, she lets me control the climate....but all the horsepower and navigation is hers.
See, this is a giant gray area for me. Do I lose my position of car commander if she crosses over into chauffeuring me for an hour or two a year? I have so many questions...Dear God!....she's  braking hard and I have no baby blue on.
Posted by Silk Road Nomads at 1:41 AM