The old Chinese proverb hails that “A journey of a thousand miles, begins with a single step”. I have always thought that was a bit obvious. Sitting here on a freezing balcony in a dingy hotel in Dogubeyazit, Turkey, a renegade frontier town 10 miles from Iran and overshadowed by Mt. Ararat (the Biblical berth of Noah’s Ark)…I realized that I had missed the point. 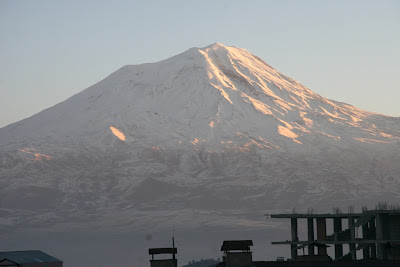 Ararat From Our Balcony

Our “single step” had begun with a decade old passion to live, travel, and wander along the historic Silk Roads of High Asia. We arrived in Istanbul 6 months ago with the intention of spending several years wandering these historic paths and now we were heading into Asia Minor on our first foray.
Forty-eight hours after picking up our rental car we pulled into Amasya in Central Turkey just before “Iftar,” the evening meal signaling the breaking of the daily fast. The travel gods were frisky and coincided our first expedition with the month of Ramadan, when Muslims fast from sunup to sundown.
We honor Islamic traditions and dress norms when living in Muslim majority regions and had joined them in keeping the fast. After a quick check-in at a dilapidated pension, we found a little café and were seated by the time the Amasya cannon thundered its approval for the evening meal to begin. 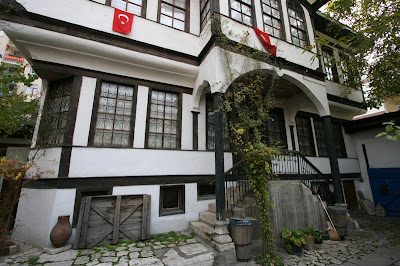 The next morning we headed east and were mesmerized by the hundreds, possibly thousands, of small villages clinging to the steep sides of the mountains, each discernible by the thrust of a single minaret into the sky.
We pulled off the highway and wound our way up a muddy unpaved road to a small village partially hidden by trees and the folds and ravines of the hills. As we pulled into the dirt square that marked the center of the village we came to a stop at the front of a remarkably large Mosque for so small a community. Seated in front of the Mosque in a variety of plastic and aging rusty chairs was a group of men whose age was well above that of my own four decades. 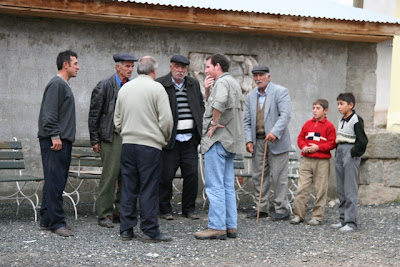 These people know how to stare. And they were demonstrating their proficiency and talent by the dozen pairs of eyes burrowing into our little car. I got out of the car and said “Merhaba!, Benim Turkce cok kotu”! (Hello…My Turkish sucks)! Smiles cracked quickly and in the distinctive Turkish style I was greeted with a chorus of “Yok…cok guzel, guzel”...”No!...Your Turkish is beautiful, beautiful.” After a series of formal introductions where each of the old men offered me his chair, I was peppered with questions: Where are you from? What about the war? Are you Muslim? Why does your wife and daughter where the veil? Etc…we settled in for a chat like we were old friends. When I asked if the village had a local bakery where we could buy bread for Iftar…the village chief grabbed me by the hand and led me down a muddy lane. As we walked he told me that he (Turin) had been raised in this village of Ortakoy and had left and worked in Istanbul for 40 years, returning to die in his own village. 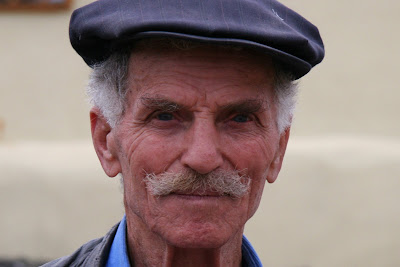 We dodged deep sink holes of mud on the narrow lane and eventually came to a cinder block home on the edge of the village. Turin stepped into a Spartan, but spotless living room containing a single small bed, calling for his wife, while I waited outside. Turkish was spoken in rapid and clipped sentences and the two of them eventually came to the door with a plastic grocery bag filled with ripe tomatoes, plum sized grapes and ¾ of a round loaf of bread…the missing ¼ retained for their own dinner. When I realized that they were giving me the core of their evening meal I protested ashamedly. I was over-talked, over-shushed, and shooed away by Turin’s wife.
Turin walked proudly on the way back to the Mosque while I withered. I had inadvertently stolen his dinner and no amends could be made. Before we reached the Mosque I pulled him aside and asked if I could please pay for the groceries. He feigned offence and continued walking telling me that the joy of meeting an “Amerikan” deep in the Turkish mountains was a great gift to his village. 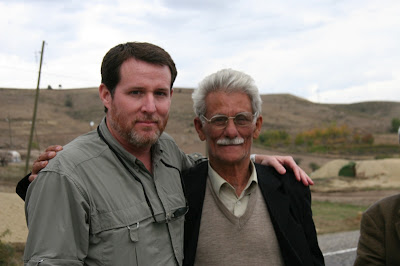 We made a commitment to return next spring and parted with handshakes and cheek kissing. I got into the car telling Turin again how grateful and humbled we were for the food and hospitality. As we pulled away and started down the muddy hill, the men stood to their feet in unison smiling and waving. Catching a glimpse in my rear view mirror Turin waved and took a single step forward…the journey of friendship had begun.
Posted by Silk Road Nomads at 8:04 PM

Your encounter with Turin and the "elders" of the town are the heart and essence of human relationship. No greater discovery can be made on your trek.

How exciting! I loved the post and the apartment looks so pretty on the outside. Good for you!
We love ya nad miss ya! Merry Christmas!
Love Brenda

Your posting literally brought tears to my eyes. Indeed, 'wonderfully hospitable' seems to pale as a description of their generosity, and is the same for the beautiful Turkish immigrants here in S.D. I sure would have loved to hear how you answered Turin's questions! Thanks for sharing your incredible adventure.